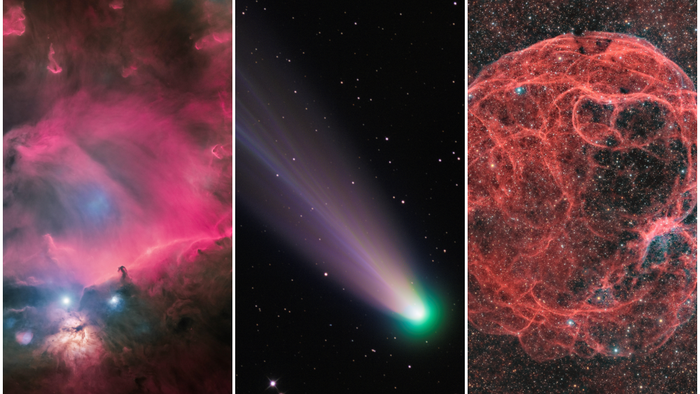 This week's astronomical images, gathered on the Astronomy Picture of the Day (APOD) website, are quite varied. Nebula enthusiasts will marvel at an incredible record of the Spaghetti Nebula, and also check out the Flame and Horsehead nebulae, accompanied by stars from the constellation Orion.

Another object that appears in this week's compilation is Comet Leonard, captured on video by a probe that studies the Sun and by an observatory in Australia. And of course you find beautiful images of other objects, always accompanied by curiosities about them.

–
A Market Analysis Podcast: from Monday to Friday, you can listen to the main headlines and comments about technological developments in Brazil and around the world. Links here: https://amarketanalysis.com/
–

So, as Quadrans Muralis is an obsolete constellation, today we say that the Quadrantids have radiant (the path from which meteors appear to come) close to the constellation Ursa Major.

The Quadrantid rain is the first that occurs in the year, with the peak of 2022 happening in the early evening of January 3rd. The photo was taken the next day and, in addition to showing the meteors, it also captured the radio telescopes of the Chinese Spectral Radioheliograph in China.

Jupiter is home to the Great Red Spot (GMV), the largest and longest-lasting storm in the Solar System. To give you an idea, GMV is over 40,000 km long, which makes it big enough to easily "swallow" several Earth-sized planets. However, the stain appears to be diminishing.

Comparisons with historical records show that the storm today has about 30% of the exposed surface area it did 150 years ago. So, to track these changes in GMV, NASA has been carrying out monitoring through the Outer Planets Atmospheres Legacy (OPAL) program with the Hubble telescope, which yielded the image above.

The record was made in 2016 and was digitally processed to make the red tones even more vibrant. Data today shows that the storm continues to shrink its surface area, but appears to be growing in a vertical direction. If it continues to shrink, it is possible that one day it will disappear completely.

You must have seen amazing pictures of Comet Leonard in December when it came close to Earth. Now, you can see it traveling through space, as recorded by NASA's Solar Terrestrial Relations Observatory-Ahead (STEREO-A) observatory.

This spacecraft orbits the Sun at an Earth-like distance from the star, as part of the STEREO mission, which relies on twin spacecraft (the STEREO A and B) to investigate the structure and evolution of solar storms. Only A remains active.

STEREO-A had been tracking the comet since November last year and produced this incredible video from footage taken on December 14th. The sequence shows some interesting features: notice the comet's sharp increase in brightness, along with an apparent increase in gas production, which forms its large ion tail.

Since the video images were taken, Comet Leonard has continued to travel towards the Sun, with the closest approach between the object and our star occurring between the orbits of Mercury and Venus. The comet did not break up and is now heading out of the Solar System.

You may have already observed the stars that form the “belt” in the constellation of Orion the Hunter. Popularly known as “Three Marias”, the stars Mintaka, Alnilam and Alnitak appear in this photo, from left to right, accompanied by clouds of glowing gas and dark dust. If you look at them closely, you'll find some familiar shapes.

In the lower right corner, near Alnitak, is the famous Horsehead Nebula, a large cloud of interstellar dust sculpted by stellar winds and space radiation. Next to it is the Flame Nebula, an emission nebula whose clouds of hydrogen glow with the ultraviolet light emitted by Alnitak.

The image above shows, in detail, Comet Leonard's beautiful ion tail, formed by ionized gas (that is, gas energized by ultraviolet light, coming from the Sun, being pushed by the solar wind).

The tail shows shades of blue, coming from recombinant carbon monoxide molecules. The coma is formed by an envelope of material being sublimated, surrounding the comet nucleus. The shade of green in this region comes from molecules of diatomic carbon, a simple and unstable form of carbon.

Due to the action of sunlight, the diatomic carbon is destroyed in about 50 hours — a recent study revealed that it is because of this process that only the comet's "head" is green, but not its tail.

If you've seen the above image of a supernova remnant and thought its filaments resemble a beautiful pasta dish, know that you're not alone — after all, the Simeis 147 remnant is much better known by the nickname "Spaghetti Nebula". Located in the direction of the constellations Taurus and Charioteer, this object covers an area equivalent to 6 full moons in the night sky.

When massive stars reach the end of their lives, they explode in huge supernovae, powerful enough to release in a matter of seconds all the energy the Sun will emit throughout its lifetime. After the supernova, what is left behind is the remnant, which heats the interstellar medium and distributes heavy elements across the galaxy.

The “cosmic spaghetti” in the image above is a remnant present in the Milky Way, whose light reached our planet 40,000 years ago. The explosion that spawned it left behind a pulsar, a compact, spherical object that emits light in opposite directions as it spins.

This is NGC 1566, a beautiful galaxy about 60 million light-years from us. Made up of billions of stars, it has long, graceful arms made up of star clusters and regions darkened by dark dust. In addition, NGC 1566 is a Seyfert galaxy, a classification given to those whose centers emit strong radiation emissions.

It is possible that this behavior is the result of a supermassive black hole existing there, which can have millions of times the mass of the Sun. NGC 1566 is considered the second brightest Seyfert galaxy, being the largest and most dominant member of the Seyfert Group. Dorado, formed by galaxies that together are responsible for one of the largest galactic groups in the southern hemisphere.

In this record, NGC 1566 appears “head on” from our perspective. The blue areas indicate star clusters, and the pink areas show star-forming regions.