These three exoplanets are too close to "death" stars 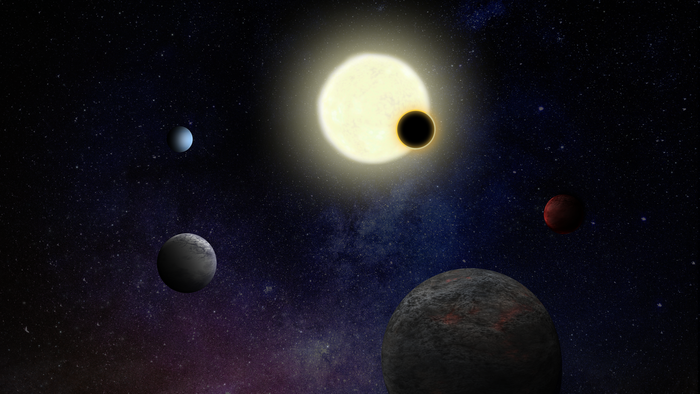 The exoplanets TOI-2337b, TOI-4329b and TOI-2669b are three recently discovered gas giants that are in danger. They have an extremely short orbital period and travel around stars that are already approaching the end of their lives . The discovery was made with the Transiting Exoplanet Survey Satellite (TESS) and WM Keck Observatory telescopes in Hawaii.

The planets have an equivalent mass of 0.5 to 1.7 times that of Jupiter and have different sizes and densities, which suggests that they came from different origins. Samuel Grunblatt, lead author of the study, reports that the planets are in such extreme positions that less than 10 days ago, no one even imagined they could actually exist.

Observations of TOI-2337b, TOI-4329b and TOI-2669b have shown that they have the smallest orbits ever discovered on planets around subgiant or giant stars at the end of their "lives". TOI-2337b, for example, could be consumed by its star in less than 1 million years, which is shorter than any other planet ever observed under these conditions.

The author noted that these findings are essential for understanding how planetary systems evolve over time, an area considered to be a new frontier in exoplanet studies. "These observations offer new windows for planets approaching the end of their lives, before their stars engulf them," he said.

Grunblatt and his colleagues identified the trio of exoplanets in data taken by NASA's TESS telescope between 2018 and 2019. They then used the WM Keck Observatory's High-Resolution Echelle Spectrometer (HIRES) instrument to confirm the finding. “The observations of these planetary systems, made by Keck, are essential for us to understand their origins and reveal the fate of stellar systems like ours ”, explained Daniel Huber, co-author of the study.

Current models of planetary dynamics suggest that planets must spiral towards their stars as they evolve over time, particularly towards the end of their lives. This process causes the planets to heat up, and can even inflate their atmospheres. Another consequence is that the orbits of the worlds around the star end up close together, which increases the chances of collisions happening.

The wide variety in the density of the planets discovered in this study suggests that the trio was defined by chaotic planetary interactions, which may have caused unpredictable rates of warming and resulted in the observed density variations. Therefore, future observations will be necessary to understand them better – the James Webb telescope could reveal the existence of water or carbon dioxide in the TOI-4329 system.

If these molecules exist there, the data could shed light on how the planets formed and what kind of interactions took place to produce the observed orbits. "Continuing to study these systems can tell us how giant planets move throughout their lives, how it affects their surroundings and inflates them during a death dive, towards their stars," Grunblatt said during a presentation.

The article with the results of the study will be published in The Astronomical Journal, but it can now be accessed in the arXiv online repository, without peer review.