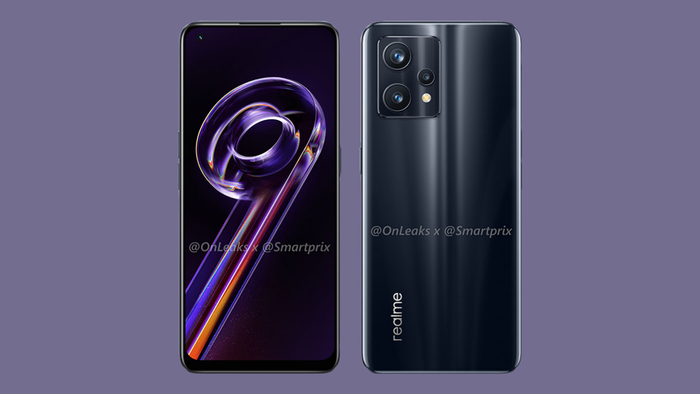 The Realme 9 Pro will be one of the models in Realme's mid-range lineup that will debut in the first half of 2022. After the device's sketches were revealed, high-quality renderings and alleged cell phone specifications have now been released.

Similar to the Realme 9i , the Realme 9 Pro may feature a bezel with thin edges on the sides and a narrower chin. In addition, the display has a cutout in the upper left corner for the front camera.

On the back, the phone has a triple camera with LED flash in a slightly raised module. The volume buttons are located on the left side, while the power button is located on the right side.

In addition to the renderings published by Smartprix, the popular leaker OnLeaks brought details about the specifications of the Realme 9 Pro. At some points, the information differs from what was shown in the sketches released this week .

For example, the device should feature a 6.59-inch screen instead of the previously suggested 6.43-inch panel. The display can still have a refresh rate of 120 Hz and a biometric sensor under the screen.

The Really , 9 Pro must be powered by Snapdragon 695 5G of Qualcomm processor with performance geared for gaming and productivity. So, the device can debut with options of up to 8 GB of RAM and up to 128 GB of internal storage.

As shown in the renderings, the phone will have a triple rear camera with a 64 MP main sensor accompanied by 8 MP (ultrawide) and 2 MP (macro) units. Meanwhile, the front camera should have a 16 MP sensor.

As per Smartprix information, the Realme 9 Pro can be launched between February and March 2022. The device and the Realme 9 Pro Plus variant have received the European Conformity (CE) certificate, ensuring approval for sale in Europe.

If this occurs, the manufacturer must repeat the calendar used in the previous generation. Remembering that the Realme 8 Pro hit stores in March 2021.