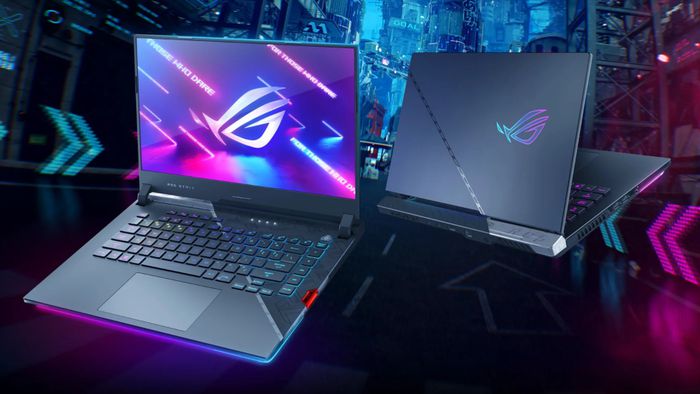 ASUS is yet another brand that took advantage of CES 2022 to launch several new gaming notebooks with updated components, such as 12th Gen Intel Core or AMD Ryzen 6000 processors, depending on the model. The products are part of the ROG (Republic of Gamers) Strix, Zephyrus and Flow lines, all with configurations that allow you to run the latest games at high frame rates per second.

The models in the ROG Strix SCAR line are aimed at e-sports athletes, according to what was reported by the company itself. A wide variety of configurations are offered with screen dimensions of 15.6 or 17.3 inches, where the display resolution can reach WQHD (2,560 x 1,440 pixels), with support for up to 240 Hz, or up to 360 Hz on Full HD models. The panel also supports Dolby Vision HDR, and covers 100% of the DCI-P3 color gamut (100% of sRGB on products with a Full HD display).

The performance suite is led by Intel Core i9-12900H processors, along with up to 32GB of DDR5 RAM at 4,800MHz (expandable to 64GB) and up to 2TB of internal storage via NVME PCIe 4.0 SSD. For the graphics part, the model's maximum configurations include an Nvidia GeForce RTX 3080 Ti GPU with 16GB of DDR6 vRAM.

The Strix G15 and G17 models, on the other hand, feature the implementation of the AMD Ryzen 6900HX processor, in addition to offering up to 16 GB of RAM memory (expandable up to 32 GB) and 1 TB of internal storage through SSD. Like the SCAR line, the devices can also be configured with an Nvidia GeForce RTX 3080 Ti graphics card, in addition to having a 15.6 or 17.3-inch WQHD (2,560 x 1,440 pixels) display, with support for a refresh rate of 240 Hz (165 Hz on more compact WQHD models, and 360 Hz on products with Full HD resolution)

The Strix G line also has connections such as an HDMI 2.0b, two USB-C 3.2 (one of which supports DisplayPort and Power Delivery), two USB-A 3.2, 2.5G LAN port and 3.5 mm for headphones. ear. The new Strix series notebooks also feature intelligent cooling with Arc Flow fans and silent mode with ambient ventilation at 0 dB.

The Zephyrus line also had several updated notebooks, in the G, M and Duo series. The most compact model is the G14, with a 14-inch display, WQXGA resolution (2,560 x 1,600 pixels) and support for a 120 Hz refresh rate. There's Dolby Vision support and 100% coverage of the DCI-P3 color gamut — the exterior of the product is still packed with 1,449 mini LEDs for a bolder look and expanded customization options.

The G15 model has a 15.6-inch display and WQHD resolution (2,560 x 1,440 pixels), in addition to support for a refresh rate of up to 240 Hz — the product has the same 100% coverage of the DCI-P3 and support for Dolby Vision. Although both notebooks come with the same AMD Ryzen 9 6900HS processor, they differ in their graphics card implementation, as the G14 comes with the AMD Radeon RX 6800S at its maximum settings, while the G15 features the Nvidia RTX 3080 Ti. Both models offer 16GB of 4800MHz DDR5 RAM, and up to 1TB of internal storage via NVMe PCIe 4.0 SSD.

Meanwhile, the M16 model features a 16-inch display with WQXGA resolution (2,560 x 1,600 pixels), support for 165 Hz refresh rate and 100% coverage of the DCI-P3 color gamut. Processing is the task of an Intel Core i9-12900H, with maximum configurations that include 16 GB of DDR5 RAM, 2 TB of NVMe PCIe SSD and an Nvidia GeForce RTX 3080 Ti card. G, but also with a Thunderbolt 4 with support for DisplayPort and Power Delivery.

The performance suite is led by an AMD Ryzen 9 6980HX processor, with up to 32GB of 4800MHz DDR5 RAM (expandable to 64GB) and 4TB of internal storage via NVMe SSD in two M.2 slots. Notebook cooling is done with Conductonaut Extreme liquid metal, capable of reducing CPU temperatures by up to 15 degrees lower than traditional thermal pastes — there are also airflow optimizations through AAS Plus 2.0 technology.

With a more compact construction, the Flow X13 has a 13.4-inch display, WQUXGA resolution of 3,840 x 2,400 pixels and a refresh rate of 60 Hz. steam and fans that feature ARC Flow technology.

All products presented by ASUS at CES 2022 will have pricing and availability details revealed in the coming months only.