The sky is not the limit | Asteroid near Earth, magnetar explosion and more! 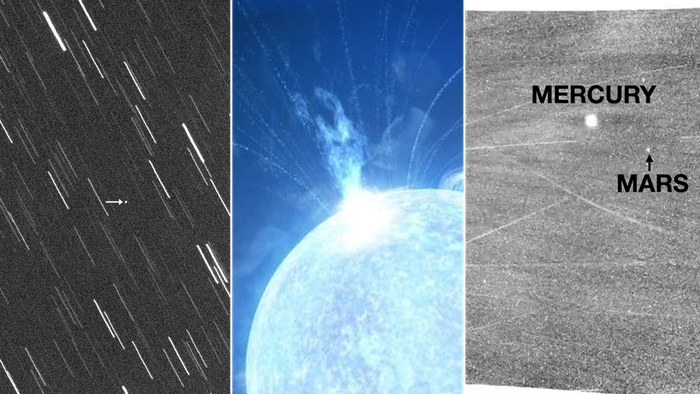 Although the beginning of the year does not have the tradition of being very active in the world of astronomy, some fascinating news has been released. Among them, the discovery of a spectacular explosion of a magnetar, a rare and extremely dense object type.

Asteroids approaching Earth were also featured, but, as usual, none of them presented a risk of collision with Earth. Check out these and other news that moved the week.

Photo of the asteroid approaching Earth

The image above is of asteroid 2021 YK, which made its closest approach to our planet, about 188,000 km away. This is equivalent to 49% of the distance between the Earth and the Moon. Although this is a short distance compared to many other asteroids considered "close", the passage of 2021 YK did not present any risk of collision.

The recording was made by the staff of the Virtual Telescope project, with the robotic unit Elena. They used a 120-second remote exposure and tracked the asteroid's apparent motion; the stars appear as streaks due to this tracking.

Magnetar explosion with the force of a billion suns!

Astronomers were able to detect an event beyond extreme: a magnetar, one of the densest types of objects in the universe, exploded with an energy equivalent to a billion suns. Located about 13 million light-years from Earth, the object took just 0.16 seconds to perform.

It took more than a year of analyzing the event to understand what exactly happened. The explosion, divided by scientists into four phases, can only be detected with an artificial intelligence that looks for interesting events amid the countless data of scientific instruments.

Parker Solar Probe of NASA entered the region known as the solar corona, a kind of upper atmosphere of our sun. Here on Earth, we can only see the corona during a total eclipse (never look directly at the sun, even eclipses). The video above was released by the space agency in December and shows the coronal flows.

These streams are made up of electrically charged gases and plasma, connecting the two opposite poles of the Sun, and are pushed by the solar wind. In the background, the Milky Way and some planets of the Solar System appear, including Earth.

1 km asteroid will approach Earth on the 18th

This asteroid is approximately 1 km across and, although it is classified as potentially dangerous, it will pass us at a safe distance of 1.93 million km. This equates to about 5.15 times the distance between the Earth and the Moon.

A new Hubble image shows two galaxies that appear to be colliding/merging, but are actually very far apart. That is, it is a conjunction, that is, an alignment between the two objects and our point of view on Earth.

NGC 105, located 215 million light-years from Earth, is 83,700 light-years across, while LEDA 212515 — the most elongated — is much further away and remains unknown to astronomers. NGC 105 has many supernovae and Cepheids, objects used to measure distances and the expansion rate of the universe.

Astronomers have identified about 75,000 supermassive black holes feeding on matter at the centers of distant galaxies. For this, they used 3D maps of galaxies created by Australian scientists. These black holes are known as active galactic centers because they emit high amounts of radiation into the hearts of their host galaxies.

In all, the study identified 700,000 galaxies. The authors used the spectral energy distribution, that is, the relative brightness of a galaxy in different parts of the electromagnetic spectrum. This data can be used to measure how many stars there are in a galaxy, among other characteristics.

NASA has communicated that the activities of the International Space Station (ISS) will be extended until 2030, and no longer the previously planned date, which was between 2024 and 2028. The decision will allow a gradual transition to the next orbital laboratories to be launched, both by private initiative and by the space agencies of countries like Russia.

In particular, the US plans to launch commercial orbital units by the end of 2030. Some companies have already been selected by NASA to present concepts for new stations.

The first images of Mars by the Tianwen-1 spacecraft

Wow! This is yet another surprise from the Tianwen-1 mission. The orbiter had apparently released a small sub satellite while in Mars orbit, returning these outrageous images. [CNSA/CLEP/PEC] https://t.co/hPezkaDOgn pic.twitter.com/b22JvIQgAb

The Tianwen-1 mission probe released a small sub-satellite with a camera and recorded three incredible images of Mars. They were released by the China National Space Administration (or “CNSA”) and feature images of ice at the Martian north pole. A fourth image from the Zhurong rover showed a Martian plain.