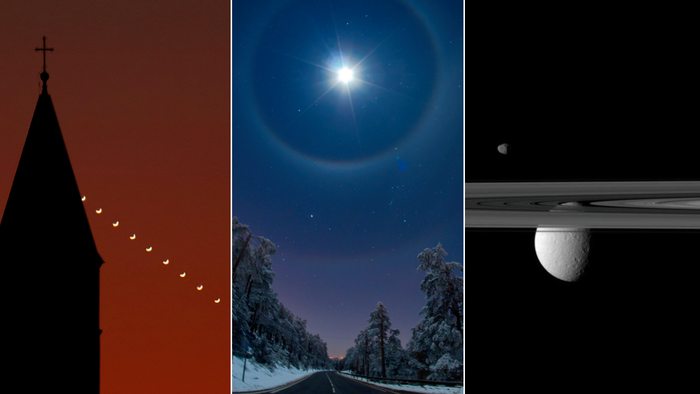 The first Saturday of the year has arrived, and you can already check the astronomical images of the first week of 2022. In this compilation, you will find some records that recall phenomena that occurred last year, such as photos of the full moons that occurred throughout 2021 and even the changes in sunrise position during the year. There is also a click of the solar eclipse that occurred in December, which in addition to showing the Moon hiding our star, also registered a friendly bird.

Also, enjoy a record of comet Leonard — in case you couldn't see it in the sky while it was visible, you can see the beauty of the object and its huge tail in a photo taken in La Palma, in the Canary Islands. Finally, don't forget to admire Saturn's moon Rhea through the "eyes" of the Cassini spacecraft, which visited it a few years ago.

The photographer who created the above composite image was dedicated to recording the full moons that shone on the nights of 2021. The composition was divided according to the months, also showing the different distances the Moon has been throughout the year. All clicks were made with the same camera and lens, in a single scale.

Note that over the year, the angular size (that is, what objects appear to be when viewed from Earth) varies — the largest full moon happened in May, just as the moon was approaching perigee, the largest approaching our planet. The smallest occurred at the height of December, when it was furthest away from us.

In addition to the size variations, the image shows an interesting custom from other countries: the ancient peoples of the northern hemisphere gave different nicknames to the full moon. For example, the first full moon in January is known there as the "Wolf Moon" thanks to ancient native American tribes, who seemed to hear wolves howling more often in this lunar phase.

This photo was taken during a winter night in Madrid, Spain. At that moment, the photographer managed to register a quadruple moon halo, a very rare phenomenon. Lunar halos form when there are small ice crystals in the atmosphere, which turn it into a large lens capable of forming halos around the Sun or Moon.

The light reflected by the lunar disk passes through hexagonal crystals, creating the sharp halo around the moon. If you look closely at the image, you'll find others: one is the circumscribed, horizontally slanted halo formed by columns of ice crystals. The third halo appears tilted 46° from the Moon, while the outermost one is partially recorded.

In addition to the halos, the night sky record captured a few stars. One of them is Sirius, which stands out as the brightest star we can see at night. In addition to her, we also see Betelgeuse and the trio of stars from the Belt of Orion.

Considered the brightest of 2021, comet Leonard offered a spectacle in the sky for those who could see it. The object's tail was too long to be fully seen with a telescope, and it was too diffuse to be seen with the naked eye, especially for those in large urban centers.

Another option would be to record the comet with wide-angle lenses, which have a wide field of view. This was the method chosen (and recommended) by the photographer responsible for the above record, produced in December 2021 in La Palma, in the Canary Islands. In addition to the comet, he recorded the constellation Sculptor and galaxies NGC 55 and NGC 7793.

Since then, the comet has continued its journey and has already passed its closest approximation to the Sun, between the orbits of Mercury and Venus. If you have survived the encounter, what is left of Leonard's core will flow out of the Solar System, never to return.

The moon that appears hidden above is Rhea, partially hidden by Saturn's rings. The record was made in 2010 by the robotic probe Cassini, which captured the F ring (the most external and discreet of the gas giant), together with the A and B rings; these two are considered the densest parts of Saturn's ring system, and appear just behind the F.

Besides Reia, the other moon that appears in the photo is Janus, farther away. It is a curious moon: it measures only 180 km, but what catches your attention right away is its elongated and irregular shape, which even resembles a potato. It switches places from time to time with Epimetheus, another natural satellite of Saturn.

The Cassini spacecraft was launched in 1997 and reached the Saturnian system in 2004. After spending more than a decade of exploration there, it ran out of fuel in 2017 and ended its mission with a final dive into the planet's atmosphere, which melted it.

The sunrise direction changes throughout the year, and a good way to see this is with the composite image above. The sequence of photos shows the direction of our star being born in each month of the last year in the city of Edmonton, Canada. The photographer always tried to make the records as close as possible to the 21st of each month.

Despite popular belief that the sun necessarily rises in the east and sets in the west, this is not exactly the case. In fact, the exact direction in which our star rises and sets depends on two factors: one is the season of the year, and the other is the latitude of the observer. In the southern hemisphere, we see the sun rising a little further to the south; in winter, the star appears further north.

No, this is not a picture of the crescent moon. In fact, what is rising behind the cathedral towers in this photo is Venus, one of our neighboring planets. Located about 60 million kilometers from us, the planet was registered in a sequence of exhibitions held on January 1st in Hungary.

Lunar phases change according to variations in the incidence of sunlight on its surface. In the case of Venus, there are some differences: the planet takes 225 days to complete an orbit around the Sun. Thus, as it travels around the Sun faster than Earth, there are some changes from time to time; sometimes it is relatively close to our planet, and at other times it is on the other side of the sun.

It is these changes in relative position that are responsible for the phases. Here, the planet appears in the crescent phase. Because it has a smaller orbit than Earth (and therefore a shorter distance to travel) and is faster, Venus moves in and out of the space between our planet and the Sun frequently. This phenomenon is known as “inferior conjunction” with the Sun, and will happen next Sunday (9).

The photographer who made this click managed to record an incredible moment: an Adelie penguin was emitting a vocalization. This is a typical behavior of male penguins, who vocalize to mark their territories – in this case, the territory was in Cape Crozier, in Antarctica.

This region is home to one of the largest colonies of Adelie penguins, and has been studied by researchers for over 25 years. In addition to the bird, the photo also shows the solar eclipse that occurred on December 4th, the last of last year. During the phenomenon, the Moon moved between the Sun and Earth, totally or partially blocking the solar disk.

Depending on the weather conditions during the phenomenon, whoever is in the region of the total solar eclipse can observe the solar corona, the outermost atmosphere of our star, which is usually overshadowed by the glare released by the Sun. In the case of this eclipse, Antarctica was the only one place where it was possible to observe it in its entirety.