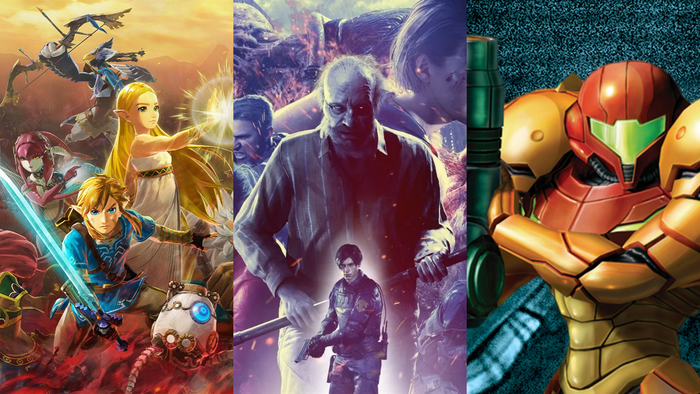 In the world of games, it is common for established franchises to try new genres and experiences, totally different from their original essences. It's as if they were spin-offs, something already known in the world of TV series.

We have several examples of this: a shooting game in which the characters turned into Funko Pops dolls, an adventure game that won a card game, an RPG that became a racing game and much more. In this list, we recall the most curious ones: some worked; others, not so much.

The iconic franchise of pocket monsters is already in its eighth generation of RPG games, but it has been criticized for maintaining a certain sameness, without concrete innovations, in the main series . However, The Pokémon Company has already released several ambitious spin-offs, which have completely changed the franchise's gameplay.

Perhaps the most striking and resounding is Pokémon GO , released in 2016 for Android and iOS. The free-to-play game uses GPS and augmented reality technologies to encourage players to capture Pokémon while walking down the street.

We have other important examples, like Pokémon Snap , where the player takes pictures of the characters. The first game appeared on the Nintendo 64 in 1999, and received a sequel in 2020, New Pokémon Snap .

We can also mention PokéPark Wii: Pikachu's Adventure , from 2009, and PokéPark 2: Wonders Beyond , from 2012, which take Pikachu to an amusement park; and 2015's Pokkén Tournament , which mixes Pokémon and Tekken into a fighting game.

And of course, it is worth mentioning the most recent bet of the franchise: Pokémon UNITE , which takes the pocket monsters to the world of MOBAs . The game is free and available for Nintendo Switch and mobile.

Xbox's beloved first-person shooter (FPS) series has also gained different spin-offs. The first was Halo Wars , real-time strategy (RTS) and with an isometric view camera — that is, a view from above —, released for Xbox 360 in 2009. In 2017, an improved version of the game, called Halo Wars, was released. : Definitive Edition , and also a sequel, Halo Wars 2 .

Another Xbox exclusive franchise, Gears of War is based on a third-person shooter. The story follows humans fighting for survival against alien races.

But these humans have already turned into Funko Pop dolls! in Gears Pop! , released for PC, Android and iOS in 2019. The game, produced by Mediatonic, the same studio as Fall Guys: Ultimate Knockout , is a real-time strategy game, similar to Clash Royale , for example. However, the game "flopped" and had its servers shut down in 2021.

Gears Tactics , released for PC and Xbox One in 2020, was another experimental game that put the series into the turn-based strategy genre, with the isometric camera. The story takes place 12 years before the first Gears , serving as a prequel to the game's universe.

Square Enix's franchise, which mixes Disney universes, was born as an action-adventure RPG. The first game was released in 2002 for PS2 , with mechanics and visuals perpetuated to this day.

The second game in the series, Kingdom Hearts: Chain of Memories , released in 2004, was quite different: the Game Boy Advance title had 2D graphics and a card-based combat system, poorly received by critics and fans at the time. Years later, it was re-released for PS2 with 3D graphics — more like the first game — but still with the card system.

However, perhaps the most different of all is Kingdom Hearts: Melody of Memory , a rhythm game released in 2020 that recalls landmark events from across the franchise. To the sound of the iconic soundtrack, the player needs to press the indicated buttons at the right times, which will generate attack commands from the characters on the screen.

Also for mobile phones and tablets, 2011 's Assassin's Creed: Recollection is a strategy card game. The player needed to assemble his board with characters, places and actions and battle with figures from the franchise's universe.

The franchise also gained a trilogy of 2.5D games (side camera, but with depth) called Assassin's Creed Chronicles . Released between 2015 and 2016, the titles are inspired by the metroidvania genre, forcing the player to solve puzzles and use layers of scenarios to move around without being seen. Each game takes place in a different country: China, India and Russia.

The game series mainly uses the action-adventure RPG genre to tell the stories of Geralt of Rivia. But the wizard has already ventured into other styles, such as fighting, in 2008's The Witcher: Versus : an online game for browser and iOS focused on brawling and brawling. The title didn't work out very well and was discontinued in 2012.

In 2014, The Witcher Adventure Game was released as the digital version of a board game. The game is available for iOS and PC through GOG and Steam.

Trying to ride the wave of hits like League of Legends , the franchise ventured into MOBAs with 2015's The Witcher: Battle Arena , released for Android and iOS. Unfortunately, the game was a flop and had its servers shut down after about a year.

Speaking of good stuff, perhaps the most successful endeavor is 2018's Gwent: The Witcher Card Game , available for free on PC, iOS, and Android. The spin-off is a card game derived from the minigame Gwent, featured in The Witcher 3: Wild Hunt .

Gwent was so successful that it even originated another spin-off: Thronebreaker: The Witcher Tales , from 2018. The title started as a single-player expansion, but soon became an independent game. The story follows Meve, a human queen of Lyria and Rivia, who must make tough choices and lead her army in the face of an invasion by the Nilfgaardian Empire. The game mixes RPG elements with Gwent's card systems.

The latest is Final Fantasy VII: The First Soldier, a battle royale that arrived for Android and iOS in 2021. In the game, up to 75 players battle until only one person or group remains, as in Fortnite or Free Fire . It is possible to choose one of the four available classes, which significantly alter the gameplay, and also use a variety of weapons, potions and spells.

It is also worth noting on the agenda Chocobo GP , a racing game with classic Final Fantasy creatures, characters and magic, which will be released in 2022 for Nintendo Switch. However, don't expect the presence of iconic characters like Cloud, Aerith or Squall, for example (at least for now).

The action-adventure series Castlevania won some games that completely escaped the traditional style of the series. An example is Castlevania: The Arcade , released for arcades in 2008, a first-person shooter.

Castlevania Judgment , released in 2008, was the first fighting game in the franchise, and the first in the series released for the Nintendo Wii. While it doesn't look like a traditional Castlevania , the title contains 13 playable characters from that universe, each with their own detailed storyline.

Resident Evil has several spin-offs that complement the main story of the saga, but some of them only serve as multiplayer add-ons. One of them is Resident Evil: Resistance , a 4v1 asymmetrical horror game — similar to Dead by Daylight , for example — that came with the 2020 remake of Resident Evil 3. In the game, a group of human survivors must escape while a villain tries to escape. stop them, using traps, cameras, monsters and more.

Already in 2022, Resident Evil Re:Verse is due to be released, an add-on to Resident Evil Village that unfortunately had its release delayed. The game will be based on six-person deathmatch battles, mixing famous heroes and villains from across the franchise.

In 2002, the Metroid franchise gained a trilogy of games separate from the main series: Metroid Prime . The games still follow the bounty hunter Samus Aran, but assume the camera with a first-person view instead of the traditional side-scrolling (when the camera is on the side, and we see the player move left and right).

The Prime series has also gained its own spin-offs, such as 2005's Metroid Prime Pinball , which incorporates the series' signature story and look into pinball.

It is worth remembering that Metroid Prime 4 was announced during E3 2017 and, since then, there is no information about the state of development of the game.

1. The Legend of Zelda

In 2014, Hyrule Warriors , one of the most successful games of the failed Wii U , hit stores. The game is a crossover between Zelda and another series: Dynasty Warrios , a very popular hack'n'slash in Japan that ended up creating its own subgenre. , the musou — the name is inspired by the game's Japanese title, Shin Sangoku Musou .

The game was produced by Koei Tecmo, the developer of Dynasty Warriors , in partnership with Nintendo. Generalizing the beating with Zelda characters, with combos and special moves, is a lot of fun; conquering parts of the map, controlled by captains, raises the challenge. All this brought a freshness to the series, centered on action RPGs.

In late 2020, the sequel Hyrule Warriors: Age of Calamity was released. The game takes place before the events of Breath of the Wild , bringing details about the great war against Ganon.

We've reached the end of our list. Do you remember any other franchise that experienced new airs? Share with us through social media!