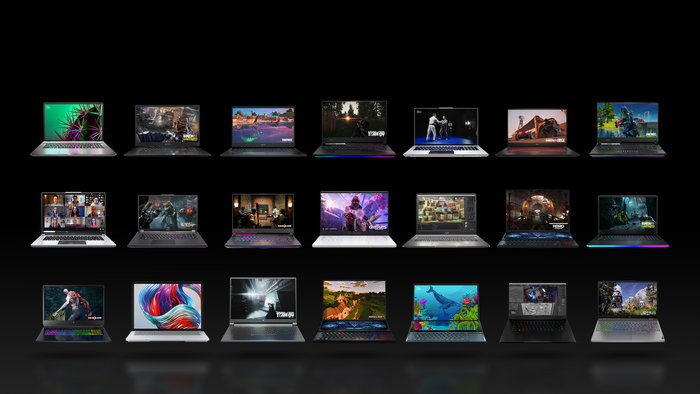 In addition to bringing the RTX 3050 to desktops , Nvidia has expanded its lineup of GPUs for notebooks with the debut of the new GeForce RTX 3080 Ti and RTX 3070 Ti mobile. The news promises to deliver a reasonable leap in performance compared to traditional variants, to the point of offering performance close to some models of desktop boards, and also debut new features that boost the battery and use the power of chips more intelligently.

Most powerful model and apparently delivering the biggest performance gains, the new GeForce RTX 3080 Ti mobile comes equipped with 7,424 CUDA cores, 58 RT Cores for Ray Tracing and 232 Tensor Cores for IA, accompanied by 16GB of GDDR6 VRAM in a 256-bit interface. Bringing configurable consumption between 80 W and 150 W, the solution features a base clock of 1,125 MHz and a boost of 1,590 MHz, offering up to 23.6 TFLOPs of computational power.

Nvidia guarantees that the novelty is more powerful than the robust TITAN RTX, and showed graphics that suggest up to 50% more performance than the RTX 2080 SUPER for notebooks. Passing this information to newer boards, and considering the specs, the RTX 3080 Ti for notebooks should be slightly more powerful than the RTX 3070 Ti for desktops, although it will have to wait for tests to prove this.

The GeForce RTX 3070 Ti mobile proves to be a more modest upgrade, bringing 5888 CUDA cores, 46 RT Cores and 184 Tensor Cores, along with 8GB of GDDR6 VRAM in a 256-bit interface. Interestingly, these are similar specs to the RTX 3070 for desktops, but power and memory limitations should still keep the laptop component away from the dedicated board.

With configurable consumption between 80 W and 125 W, the launch delivers a base clock of 1,035 MHz and a boost of 1,485 MHz, thus reaching 17.4 TFLOPs of computational power. According to Nvidia, the chip is 70% more powerful than the RTX 2070 SUPER mobile — putting that in perspective with modern graphics cards, the RTX 3070 Ti mobile should be positioned just above the RTX 3060 Ti for desktops.

Another trump card of the new GPUs is the debut of the 4th generation of Max-Q technology — previously used to identify low-power graphics chips, the term now refers to the set of features developed by the brand to optimize the performance of laptops, seeking a balance between efficiency and performance. The highlight goes to three new features that promise to deliver even more firepower without significantly affecting the battery.

The first of these is the CPU Optimizer, a technology that seems to act similarly to AMD SmartShift . The company revealed that it has collaborated with AMD and Intel to develop a code framework by which GeForce solutions will be able to communicate with the processor to adjust the amount of power distributed between CPU and GPU, evaluating temperature and stress of each component to deliver the best performance for each scenario.

Rapid Core Scaling, on the other hand, is aimed at processing intensive applications such as Premiere Pro and Blender, and allows graphics chips to use cores intelligently and more efficiently, by activating only the number of cores necessary for the workload. . That way, clocks can be increased significantly, delivering up to 3 times more performance out of the socket, according to the company.

Finally, Battery Boost 2.0 is a completely redesigned version of the feature dedicated to extending battery life, using Artificial Intelligence to deliver up to 70% more battery life while seeking to balance CPU and GPU consumption, image quality and frame rate in real time.

There is no information about the arrival of these models in Brazil, but it is likely that we will see machines from brands such as ASUS and Alienware, as well as customized devices from Avell , debut here in the future.