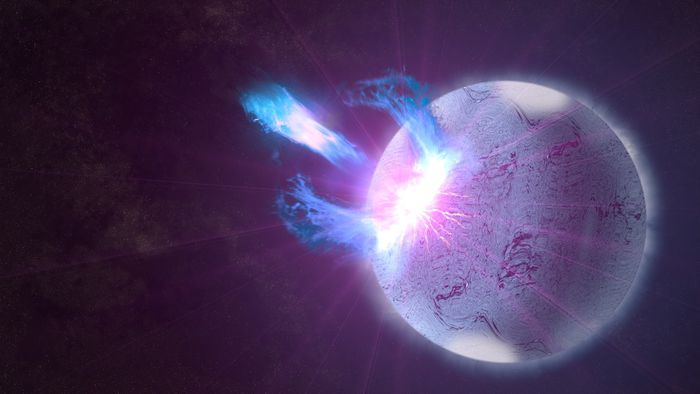 A magnetar located about 13 million light-years from Earth exploded and spread an energy equivalent to a billion suns across the universe — all in just 0.16 seconds. Scientists spent more than a year analyzing the event and divided it into four phases.

Magnetars can be 100,000 times brighter than our Sun, according to Alberto J. Castro-Tirado, research professor at the Andalusian Institute of Astrophysics of the Spanish Research Council. "But in the case of the flash we studied, the energy released is equivalent to what our Sun radiates in 100,000 years," he said.

This event was detected in April 2020, and scientists soon pored over the data to study it in detail, as it is quite rare to find an explosion like this. They then divided it into four phases, based on the magnetar's energy output during the explosion and measuring the variations in its magnetic field.

To detect such a fast flash, the researchers relied on artificial intelligence, installed in the Atmosphere – Space Interactions Monitor (ASIM) instrument, which is located on the International Space Station. This is a project led by the European Space Agency that has X-ray and gamma-ray cameras and detectors.

According to Reglero, director of the UV Imaging Laboratory, it's almost as if the magnetar has decided to transmit its existence from its “cosmic solitude” to the universe, glowing with the force “of a billion suns”.

When neutron stars (the result of the collapse of a massive star at the end of its life) reach high magnetic fields, scientists call them magnetars. They can have a magnetic field up to a thousand times stronger than those of other neutron stars and are the most powerful magnetic objects in the universe.

The matter in these objects is also extremely dense — a piece of neutron star the size of a sugar cube would weigh more than 1 billion tons. Next to black holes, they are the most intense gravitational field bodies we know.

Only about 30 magnetars have been identified to date, out of about 3,000 known neutron stars. The event of this discovery, dubbed GRB2001415, is the most distant magnetar explosion detected to date, possibly caused by "earthquakes" in the object. The study was published in the journal Nature.