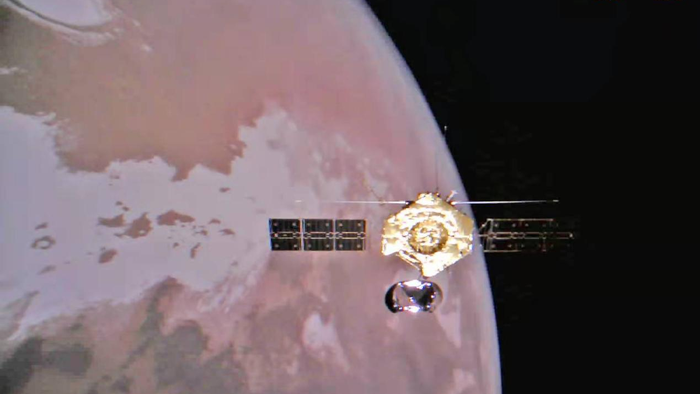 Four new color photos of Mars, taken by the Tianwen-1 mission, have been published by the National Space Administration of China (or “CNSA”). The images include the first complete record of the mission's orbiter traveling around the Red Planet, along with images of ice at the Martian north pole and a plain.

The Tianwen-1 mission was launched in 2020 and traveled more than 475 million kilometers before entering the orbit of Mars. The CNSA explained that the photo was taken by a small sub-satellite of the orbiter, which was equipped with a camera, which was released to make the records, and is now approximately 350 million kilometers from Earth.

Check out the new photos:

Wow! This is yet another surprise from the Tianwen-1 mission. The orbiter had apparently released a small sub satellite while in Mars orbit, returning outrageous images. [CNSA/CLEP/PEC] https://t.co/hPezkaDOgn pic.twitter.com/b22JvIQgAb

It took three months of preparation for the orbiter to release the landing capsule, which carried the Zhurong rover inside. The vehicle landed on the Martian surface in May 2021, making China the second country to successfully land on Mars — the United States was the first nation to achieve the feat.

The Zhurong rover is over 200 days of operation, going well beyond the planned three-month duration. The Tianwen-1 mission, consisting of the vehicle, its landing module and an orbiter, has already collected and transmitted nearly 540 gigabytes of data to the mission's control center. According to the CNSA, the devices are still in good condition, with enough energy to carry on with the activities.

The great success of the Tianwen-1 mission inspired China to prepare for future space endeavors. According to information from Zhang Rongqiao, chief designer of the country's first interplanetary mission, this is just the beginning of China's planetary exploration plans, and that there are still several projects to come — including partnerships with other countries.

He mentioned the Tianwen-2 mission , aimed at exploring and collecting samples of near-Earth asteroids. The studies began two years ago and, according to him, the project's design has just been completed. “The mission is ready to go to the next stage of prototype development,” he explained. “Questions about essential technologies for this phase have already been resolved, and important equipment has already started to be produced”.

The Tianwen-3, a mission that is also under development, was designed to collect samples from Mars, and both projects are in a stage of research into essential technologies. In his speech, Zhang also highlighted the importance, as well as the need for international cooperation, in these projects.

According to Zhang, China maintains the desire to collaborate with the whole world in all the projects it develops. “We hope that, through international cooperation, all of us in this area can strive to reach the stars,” he said. To illustrate the point, he brought up the recent example of the communication test of the Tianwen-1 orbiter and the European probe Mars Express.

Amidst several experimental communication tests, the "conversation" between Mars Express and the rover has worked out , and the teams in Europe and China plan to carry out new collaborations for the transmission of data. “The exploration has no end and neither does cooperation. We welcome collaboration in all spheres,” concluded Zhang.