10 Harry Potter actors who have died 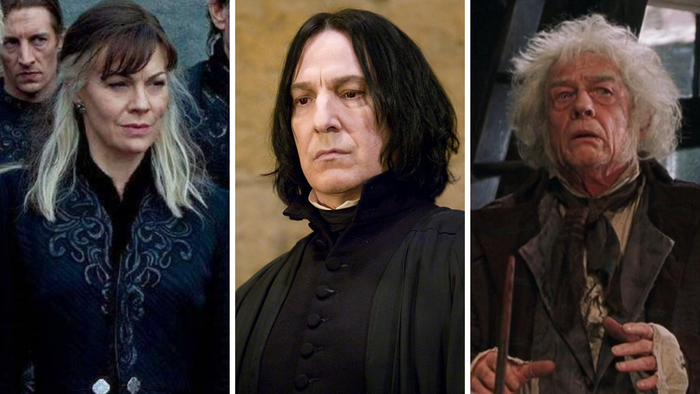 Commemorating 20 years of the Harry Potter series with Back to Hogwarts is a cause for celebration for fans, but also a beautiful reminder of how old we are getting. Over these two decades, we have followed not only the growth of the characters, but also of their actors. And, in the same measure, we said goodbye to many names that marked the franchise and left us, whether for reasons of age, health or who died in very tragic situations.

Interestingly, death is a recurring theme within the Harry Potter universe. In every movie and book, the characters are faced with the loss of someone important and there is enormous respect for those who are gone.

Thus, as a way to honor these actors who marked generations and were part of the childhood of so many people, we recall some names that were part of the franchise and that have already left us. Remember some — and be surprised by others.

Anyone who followed the release of the films as they arrived in theaters will remember the sad farewell of actor Richard Harris. He was Dumbledore's first incarnation, appearing in Harry Potter and the Philosopher's Stone and The Chamber of Secrets , but asked to step aside from the franchise to treat lymphatic cancer. He died in October 2002 at the age of 72.

This change is quite clear in the series. Harris's Dumbledore was much more like that kindly grandfather, with a calmer speech and slow, welcoming gestures, while his successor, Michael Gambon, adopted a more active and even energetic old wizard posture from The Prisoner of Azkaban . Both are very good, but it's undeniable that the first version is much more welcoming — even more so given the more childlike tone of the plots.

Another actor who appeared in Harry Potter and the Sorcerer's Stone and left us was Verne Troyer, the goblin Grampo. While he was best known for his role in the Austin Powers series as the Mini-Me character, his characterization as the goblin who takes Harry (Daniel Radcliffe) and Hagrid (Robbie Coltrane) to Gringotts' coffers is something that has captured Gringotts' imagination. a lot of children in the early 2000s.

The actor had a kind of severe dwarfism and was only 81 centimeters tall. In addition, he suffered from depression and struggled with alcoholism. He died aged 49 in April 2018.

Anyone who has watched a Harry Potter movie has hated the Dursley family. The hero's uncles had always treated him with contempt, so it was very easy to reject these Muggles—in every sense of the word. And a lot of that feeling was in the great portrayal of Richard Griffiths as Uncle Vernon, who built the character to be this obnoxious someone.

Despite this, the 65-year-old actor was a well-respected name in English cinema, having appeared in several films, TV series and plays. He's even featured in Pirates of the Caribbean: Navigating Mysterious Waters and The Invention of Hugo Cabret , as well as The Hitchhiker's Guide to the Galaxy and the classic Chariots of Fire .

Griffiths passed away on March 28, 2013 after cardiac complications.

It's even unfair to limit John Hurt's career to the Harry Potter and the Sorcerer's Stone wand seller. The actor is a veteran of cinema and had more than 50 years of career, making from films like Alien: The Eighth Passenger and V for Vendetta to voice the Tigger of the Winnie the Pooh gang. Not to mention that he was the Doctor Who himself in the special of The Day of the Doctor series , one of the most memorable of the franchise.

In Harry Potter , Hurt returned to live Ollivanders in the two parts of The Deathly Hallows , in which he was responsible for explaining the origin of the Wand of Wands.

Another victim of the same disease was actor Roger Lloyd-Pack, Bartô Crouch from Harry Potter and the Goblet of Fire . The influential member of the Ministry of Magic isn't quite a villain in the film, but he is one of those uncomfortable figures like all the characters with political connections within the series. He is involved in organizing the Triwizard Tournament and later we learned that he was being controlled by Voldemort's forces because of the Imperius Curse.

The actor died in January 2014 at 69 years old. In addition to Harry Potter , he also appeared in the series The Borgias and the movie The Spy Who Knew Too Much .

The Malfoy family is much more remembered for its male representatives, but Narcissa Malfoy also has her dose of relevance within the saga. It's her motherly side that makes her betray Voldemort himself to protect her son Draco, which makes for some impressive twists and turns in the series' final streaks — at a time when we don't think any Malfoy is any good.

Actress Helen McCrory died aged 52 in April 2021 from cancer. In addition to Harry Potter, she participated in the Peaky Blinders series and in the films The Invention of Hugo Cabret and 007: Operation Skyfall .

If you've never heard the name Timothy Bateson in Harry Potter , don't be scared. That's because he never actually appeared on the show, just his voice. The veteran actor was the voice of Monster, the racist house-elf of the Black family in The Order of the Phoenix .

In fact, the film was his last work. Bateson died in September 2009 at the age of 83 — 50 of whom were dedicated to film, TV and theater.

In the books, the character Fenrir Greyback was a name that conveyed fear just to be mentioned, but his role in the movies was never very memorable. The Death Eater werewolf was played by actor Dave Legeno, who has become much more of a strange figure than a truly menacing one.

Still, this allowed him to be one of the top names in Voldemort's forces, participating in Harry Potter and the Half-Blood Prince and two-part The Deathly Hallows .

The actor died at the age of 50 in July 2014 after an accident while hiking in a region known as Death Valley, California. His body was found by people who were also walking in the region and, according to police, it is very likely that the actor became ill due to the heat and died as a result of the high temperatures. On site, thermometers can reach 48º C.

One of the most discussed deaths of the Harry Potter cast, Robert Knox was more known for his murder than for his role in the series. In the films, he was a Ravenclaw student who was part of Horacio Slughorn's special student club in The Half-Blood Prince . However, what really impressed me was the cause of his passing.

Knox was killed in 2008 when he was just 18 years old. He was stabbed at the door of a bar in London while trying to protect his younger brother. The crime was so barbaric that the killer was sentenced to life in prison and the story will soon become a documentary .

Perhaps the most remembered loss in these 20 years of Harry Potter is that of actor Alan Rickman, the eternal professor Snape. The actor died in January 2016 from pancreatic cancer and left not only fans of the franchise orphans, but movie lovers in general.

In addition to being the Potions teacher at Hogwarts and delivering one of the most beautiful moments of the entire series — “Always” is something that shakes potterheads to this day — he has appeared in a multitude of other films, including the first Hard to Kill , where the villain Hans Gruber was. He also appeared in the films Simply Love and Sweeney Todd: The Demon Barber of Fleet Street .