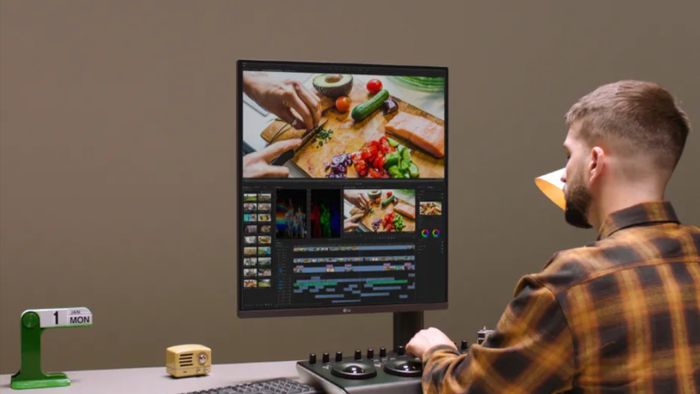 LG presented another product for its line of monitors, and this new panel has quite curious features. Built with a 16:18 aspect ratio, the 28MQ780 DualUP is geared towards productivity, especially multitasking.

The screen is 27 inches diagonally, but in practice it’s as if two 21.5-inch ultrawide displays were placed one directly above the other, according to what was reported by the brand itself.

In addition, the high resolution Square Double QHD (2,560 x 2,880 pixels) allows two or more windows to be displayed on the screen in high definition — LG stated that “the format prevents side-to-side head movements, which it is the main cause of neck pain”

–
Feedly: Subscribe to our RSS feed and don’t miss any A Market Analysis content in your favorite news aggregator.
–

The DualUP’s specs also include a maximum brightness of 300 nits, a 1000:1 contrast ratio and support for 98% of the DCI-P3 color gamut, making it suitable for tasks that demand high tonal accuracy, such as video editing or Photos. There is also support for HDR10 content, and the panel’s response time is 5 ms.

The monitor’s look is quite unobtrusive, with thin edges around the Nano IPS panel — only the bottom section is a little thicker, where LG’s logo appears. The product also comes with an LG Ergo stand, which can be fitted to almost any table and allows for height, tilt and swivel adjustments.

DualUP also features a wide range of connectivity options, including three USB-C ports with DisplayPort support and up to 96W Power Delivery, plus two HDMI and two DisplayPort.

LG has not released the price and availability of the monitor, but said more details will be revealed during its virtual event at CES 2022, scheduled for January 4th. The brand is also expected to showcase other miscellaneous products, such as a 32-inch UltraFine screen with 4K resolution, its new lineup of televisions (including a portable battery-powered model), and a new soundbar with up-facing speakers.